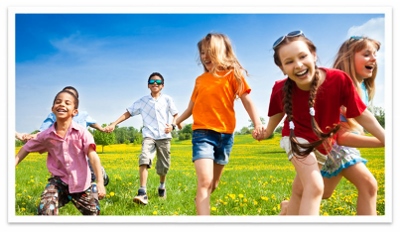 In over the decade I have spent working with children, I’ve learned that having a few, simple games that you can easily play can be a life saver. Below are a few of my favorites.

Don’t Wake the Dragon
Supplies: item for treasure
How to Play: One student is the dragon and sits in an open area on a chair or cushion. The other students are knights who needs to steal the dragon’s treasure without waking the dragon. The dragon goes to ‘sleep’. One at a time, a silent signal is given to each knight to try to sneak past the dragon and steal the treasure. If the dragon hears footsteps or a noise from the knight, he or she wakes up and roars. The knight is toast, and goes to the end of the line. A successful knight becomes the next dragon. This game requires the whole group to stay quiet It’s a challenge, but it’s great to see the different ways students try to sneak- we’ve had students ‘sniper

Steal the Bacon
Supplies: item for "bacon"
How to Play: Children are divided into two teams. Each child is given a number, and the same numbers are assigned to the opposite team members. An item is placed in the middle of the playing field. When a number is called, both people with that number run forward to grab the ball. Once someone is in possession of the ball, they must run back across their team line while the other person tries to tag them. If they safely make it back, their tem gets a point. If they are tagged, the opposite team gets a point.

Pick-Pocket Tag
Supplies: Need flags or a strip of cloth to be used as a tail
How to Play: Players have a tail inserted into her/her belt or pocket that is hanging at the backside. All players chase one another trying to collect tails, while protecting his/her own. Players with the most tails collected in a specified time are the winners.

Sharks and Minnows
Supplies: none
How to Play: All the kids stand to one side of the field (minnows). One (or two or three) kids stand in the middle (sharks). On the whistles, the minnows have to run past the sharks without being tagged. If they are tagged, they become a shark and join the rest of the sharks in the middle. Then, on the next whistle, the remaining minnows will once again run back across the field trying to avoid the sharks. This filtering process continues until one, or a few kids, are left. Ten they become the sharks of the next round.

Captains Coming
Supplies: none
How to Play: The person giving out the commands is the captain. Each command has a specific role that players will be asked to act out. After a command is given, all players gather together accordingly. When someone is unable to join any group because of the size restrictions, they can either step outside the playing area and cheer, or let them join in the next round.