What are Multiple Intelligences? 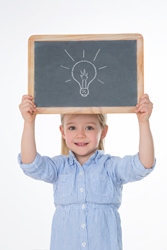 The following are Multiple Intelligences as identified by Dr. Howard Gardner and they are: Linguistic/Verbal, Math/Logical, Spatial, Body/Kinesthetic, Musical, Interpersonal, Intrapersonal and Natural. Most school and child care programs traditionally only value Logical and Linguistic learners. But in the 1970’s Howard Gardner took the idea of “intelligence” and made it plural, thus opening the door for many kinds of smart….multiple intelligences. This month’s and next month’s articles are dedicated to explaining a little about the eight different multiple intelligences.

Logical/Mathematical Intelligence
The ability to develop equations and proofs, make calculations and solve abstract problems. The children who display an aptitude for numbers, reasoning and problem solving typically do well in traditional classrooms where teaching is logically sequenced and students are asked to conform. These children enjoy conducting experiments, creating statistical charts, Venn Diagrams, and computer programs.

Linguistic Intelligence
The ability to analyze information and create products involving oral and written language such as speeches, books, and memos. Linguistic learners demonstrate strength in the language arts such as speaking, writing, reading, and listening and have always been successful in traditional classrooms because their intelligence lends itself to traditional teaching. These children enjoy written reports, oral reports, poetry, essays, plays, and written dialogues.

KinestheticIintelligence
The ability to use one’s own body to create products or solve problems. The children who experience learning best through games, movement, hands-on tasks, and building are kinesthetic learners. These children are often labeled "overly active" in traditional classrooms where they are told to sit and be still! Kinesthetic learners love to role play, participate in dramatic play, dancing, hands-on demonstrations, 3-D projects and live action exhibits.

Spatial Intelligence
The ability to recognize and manipulate large-scale and fine-grained spatial images. These children learn best visually and by organizing things spatially. They like to see what you are talking about in order to understand. They enjoy charts, graphs, maps, tables, illustrations, art, puzzles, and costumes - anything eye catching. Spatial learners enjoy drawing, photo essays, murals, sketches/diagrams, and videotapes.

Musical Intelligence
The ability to produce, remember, and make meaning of different patterns of sound. Children who learn well through songs, patterns, rhythms, instruments and musical expression can be easily overlooked in traditional education. These children use raps, chants, musicals, sound effects, musical conceptualizations of understanding, for example: showing understanding of a character in a novel via musical composition or percussion instruments, etc.

Interpersonal Intelligence
The ability to recognize and understand other people’s moods, desires, motivations and intentions. These are children who are noticeably people oriented and outgoing, and do their learning cooperatively in groups or with a partner. These children may have typically been identified as "talkative" or " too concerned about being social" in a traditional setting. These children excel in group discussion, peer teaching, explaining something to someone else, debates, group simulations, and interviews.

Intrapersonal Intelligence
The ability to recognize and understand their own moods, desires, motivations and intentions. These children are especially in touch with their own feelings, values and ideas. They may tend to be more reserved, but they are actually quite intuitive about what they learn and how it relates to them. They enjoy journaling, self-paced documentation, scrapbooks, and independent projects.

Naturalistic Intelligence
The ability to identify and distinguish among different types of plants, animals, and weather formations that are found in the natural world. These children love the outdoors, animals, and field trips. More than this, though, these students love to pick up on subtle differences in meanings. The traditional classroom has not been accommodating to these children. Naturalistic intelligent children enjoy Ecology projects, using plant and animals (or pictures of them) when doing work, for example: 2 daisies + 2 pansies = 4 flowers, fieldwork, nature studies, applying the lessons to the natural world.

Source: Many Kinds of Smart! Understanding The Theory Of Multiple Intelligences Shared with you by Lisa Murphy, M.Ed.